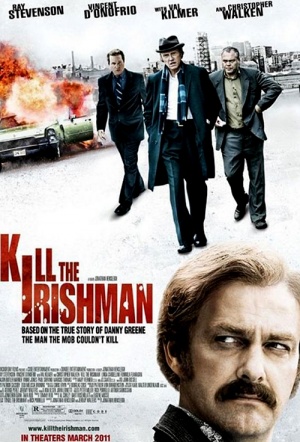 Crime thriller based on the life of Danny Greene, an Amreican-Irish thug, mobster and eventual FBI informant who rose to power in the Cleveland mafia during the 1970s.

"Over the summer of 1976, thirty-six bombs detonate in the heart of Cleveland while a turf war raged between Irish mobster Danny Greene (Ray Stevenson, Punisher: War Zone) and the Italian mafia. Kill the Irishman chronicles Greene's heroic rise from a tough Cleveland neighbourhood to an enforcer in the local mob. Turning the tables on loan shark Shondor Birns (Christopher Walken, Deer Hunter) and allying himself with gangster John Nardi (Vincent D'Onofrio, Law & Order: Criminal Intent), Greene stops taking orders from the mafia and pursues his own power. Surviving countless assassination attempts, Danny Greene's infamous invincibility and notorious fearlessness eventually led to the collapse of mafia syndicates across the US and also earned him the status of the man the mob couldn't kill." (Official Synopsis)

GoodFellas remade by the Zucker brothers.

An extravagantly corny ode to the collapse of the Cleveland mafia in the 1970s.

A pedestrian chronicle of an eventful true story.

It's just another gangster movie for the pile.