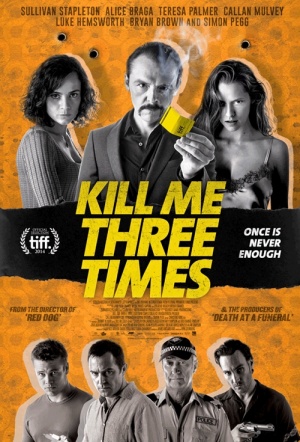 "A dental surgeon (Sullivan Stapleton) with gambling debts and a conniving spouse (Teresa Palmer), a hunky gas jockey (Hemsworth) looking to skip town with his secret lover, a corrupt cop (Brown), a motel proprietor (Callan Mulvey) who's become excessively proprietary over his wife: each of these characters has a scheme to realize, and each scheme requires the elimination of the same woman (Alice Braga)... Involved in all these sordid transactions is one Mister Wolfe (Pegg), a seasoned professional in the practice of snooping and, for the right price, murder." (Toronto International Film Festival)

Feels like poser noir all the way, never achieving the darkly comic flair or freshness of style needed to sell its fatalistic twists.

Unashamed to resurrect the laziest tropes of the Tarantino rip-offs that once clogged the shelves of every Blockbuster in the land.

Stenders, arranges bodies in spaces without distinction, but he does show a curious fondness for shots of moving cars. It's an image he returns to so many times that you wonder if he was as eager to get out of here as you are.

Cue 90 minutes of dutiful twisting and turning, crossing and bloody double-crossing, but not one moment of actual surprise.

Squanders a talented cast, sharp visuals and spectacular locations on a grisly trail of mayhem that rarely yields much mirth.