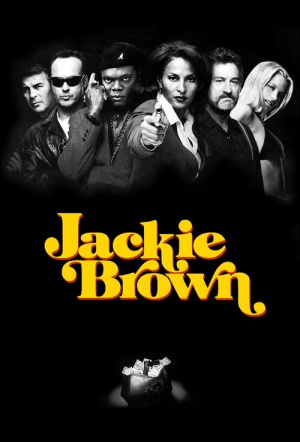 The third film from Quentin Tarantino, based on the crime novel Rum Punch by Leonard Elmore. Tarantino moves the action from Florida to Los Angeles, where flight attendant Jackie (Pam Grier) gets caught smuggling cash into the country for her gunrunner boss (Samuel L. Jackson). When the cops (including Michael Keaton) try to use Jackie to get to her boss, she hatches a plan - with help from a bail bondsman (Robert Forster) - to keep the money for herself.

Offers an abundance of pleasures, especially in the realm of characterization and atmosphere.

For all its enthusiasm, this film isn't sharp enough to afford all the time it wastes on small talk, long drives, trips to the mall and favorite songs played on car radios.

This is the movie that proves Tarantino is the real thing, and not just a two-film wonder boy.

A leisurely and easygoing diversion that goes down easy enough but is far from compelling.

Tarantino has once again defied the critics and produced a movie that solidly establishes him as still the most important filmmaker of the decade.