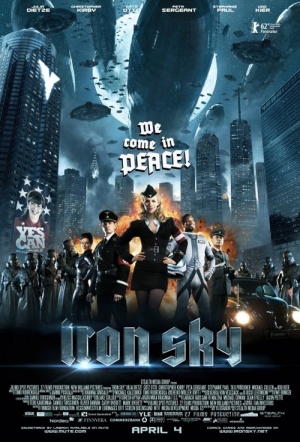 Sci-fi comedy summed up in four words: Nazis on the moon. At the end of WWII, the Nazis fled to the dark side of Earth's natural satellite to hide and rebuild.

In 2018, a US lunar mission uncovers the hidden fortress and the evil clan turn their firepower on Earth - in particular the US, led by a Sarah Palin-esque President (Stephanie Paul).

Iron Sky - independently produced in Finland - became a YouTube sensation before it was even made courtesy of well-made teaser trailers. About 10% of the 7.5 million Euro budget was raised by fans who invested in 'war bonds' online and ideas were pitched to the filmmakers via wreckamovie.com - many were used including character names and spaceship designs.

The problem with high-concept films is that once you’ve ticked off the promises of the pitch, where do you go next? As Samuel L Jackson once so eloquently put it, “I have had it with these motherf***ing snakes on this motherf***ing plane!” Anyone brave enough to approach Finnish-German-Australian curio Iron Sky – essentially ‘Nazis On The Moon’ – will feel the same.

Much more amusing in theory than in execution.

It's not terrible, by any means: just not nearly as funny or cruel as its killer premise suggests.

Lowballing schlock and nothing more.

Vuorensola's sci-fi comedy is uneven, its humor never quite matching the luster of its visuals.

Iron Sky really could have been something if only someone had written a decent script.

Insert your own 'lunar' pun here - this is a true space oddity.