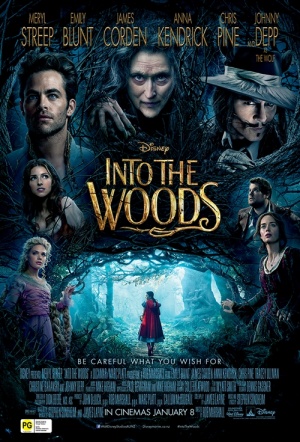 Walt Disney fairytale, fantasy musical – from the director of Chicago – starring Meryl Streep, Emily Blunt, James Corden, Anna Kendrick and Chris Pine. Follows the tales of Cinderella, Little Red Riding Hood, Jack and the Beanstalk and Rapunzel, all tied together by a baker and his wife and their wish to begin a family. Into the Woods is based on the stage musical with music and lyrics by Stephen Sondheim (Sweeney Todd), which premiered on Broadway in 1987.

Into the Woods / Reviews

Stephen Sondheim and James Lapine’s delightfully grisly 1987 musical Into The Woods is the latest to get a big screen adaptation. Emily Blunt (Edge of Tomorrow) and James Corden (One Chance; Begin Again) star as ye olde baker and wife, sent on a journey to retrieve items from the woods by the village Witch (Meryl Streep in almost-boringly fantastic form). There, their story collides with Red Riding Hood, Jack and the Beanstalk, Rapunzel and Cinderella in a tangled web of fantasy and reality.

Marshall hasn’t made one of the great movie musicals here, but he hasn’t bungled it either — far from it.

Family entertainment with death, limb-lopping and other horrors.

Splendid Disney screen adaptation... infuses new vitality into the tired marketing concept of entertainment for "children of all ages."

A layer of theatregoing good taste covers this entertaining if stately movie musical.

Trapped between the stage and the screen, at odds with both its source material and its adopted medium.

Yet amid the cleverness and the wickedly subversive tilt they take, there's an affectionate regard for all of their characters.

This twisty fairy-tale mash-up shows an appreciation for the virtues of old-fashioned storytelling, along with a welcome dash of subversive wit.

There are brilliant, bewitching moments allied to hilarious and touching ones. Just not enough of them in what veers, at length, between the clever, the terrifying and the bit tiring.

Into the Woods / Trailers