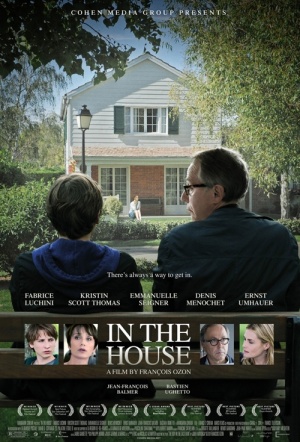 A reclusive sixteen-year-old boy insinuates himself into the house of a fellow student from his literature class and writes about it in essays for his French teacher. Inspired by the talent presented by this gifted and unusual pupil, the teacher rediscovers enthusiasm for his work, but the boy's intrusion will unleash a series of uncontrollable events.

In the House / Reviews

My high-school English teacher saw my literary quirks as something that needed to be nurtured, not amended – his intrigue into my characteristic idiosyncrasies being remarkably similar to those portrayed in Francois Ozon’s In the House. However, my teacher wasn’t a crotchety has-been/never-was and I certainly didn’t have any vivid desire to bang my best mate’s mum. Then again, that’s what makes this film so damn entertaining.

Low-key thriller feels like a return to form for Ozon.

Utterly assured, breathtakingly executed and riotously funny, this is a delight.

Luchini's dependable deadpan goes a long way toward making the puzzle pieces snap pleasingly into place, but as with most such endeavors, In the House is about its own construction and nothing more.

As In the House accelerates, it also starts to sputter, piling on incidents and revelations that cause its web of implications to unravel.

A black-comic psychological drama with poise and self-possession.

With typically dark playfulness, Francois Ozon considers the student-teacher relationship and the uses of fiction as a key to accessing other lives.

Ozon weaves another spellbinding tale that mingles the real and imaginery with terrific effect.