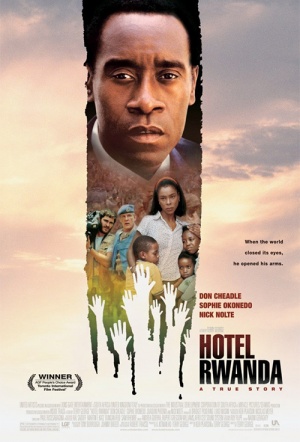 Dubbed an "African Schindler's List," Hotel Rwanda is an American historical drama based on real-life events in Rwanda during the spring of 1994. Winner of the AGF People's Choice Award at the 2004 Toronto Film Festival and starring Don Cheadle and Sophie Okonedo.

Paul Rusesabagina (Cheadle), a Hutu, manages the Hôtel des Mille Collines and lives happily with his Tutsi wife (Okonedo) and their three children. When Hutu military forces initiate a campaign of ethnic cleansing against the Tutsi minority, Paul offers his hotel as shelter for refugees. As the U.N. pulls out, Paul struggles alone to protect the Tutsi refugees in the face of the escalating violence that later became known as the Rwandan genocide.

[A] flat, cramped staging which, combined with d.p. Robert Fraisse's harsh overlighting, gives the film the feel of a cheap backlot production, even though it was shot on location.

There's a tidiness and sense of convenience in the film's stock characterisations and button-pushing plotting that detracts from its impact. The film doesn't just contrive to contain the slaughter, but also its own anger.

Hotel Rwanda is a political thriller based on fact that hammers every button on the emotional console.

The film works not because the screen is filled with meaningless special effects, formless action and vast digital armies, but because Cheadle, Nolte and the filmmakers are interested in how two men choose to function in an impossible situation.

A film that uses the comfort of the predictable to make horror palatable to a wider audience.

Both tough and tender, the movingly rendered production often strikes a devastating chord without resorting to any of the manipulative string-pulling known to accompany movies about 'men who made a difference.'