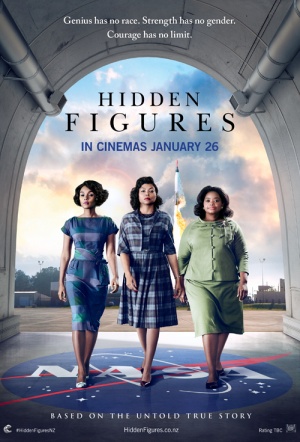 Physicist, space scientist, and mathematician Katherine G. Johnson (Henson), along with Dorothy Vaughan (Spencer) and Mary Jackson (Monáe), were instrumental in executing one of the greatest operations in history: the launch of astronaut John Glenn (Glen Powell) into orbit. It was an achievement that restored the United States' confidence, turned around the Space Race, and galvanised the world. The gifted trio crossed gender and race lines and inspired generations to dream big. Kirsten Dunst and Kevin Costner co-star.

Looking for an entertaining film starring women of colour dominating an intellectual field? Then skip this review and watch Hidden Figures right bloody now. This is the real-life tale of three African-American women who didn’t get enough credit for their contributions to NASA and the space race, making it an immensely valuable story to tell.

"Hidden Figures" is empowerment cinema at its most populist, and one only wishes that the film had existed at the time it depicts...

The film aims for the stars but might have gone stratospheric if it cooled its jets ever so slightly.

A crucial episode of the nineteen-sixties, centered on both the space race and the civil-rights struggle, comes to light in this energetic and impassioned drama.

There is something to be said for a well-told tale with a clear moral and a satisfying emotional payoff.

Although it looks like a movie machine-tooled to ride the wave of #OscarsSoWhite backlash, its actual ambitions seem far more modest: to entertain a lot, to educate a bit and to cheerlead pretty much constantly.

The story is a great one and all the better for being mostly true...

Like the calculating women whose lives it celebrates, "Hidden Figures" knows what it's doing.