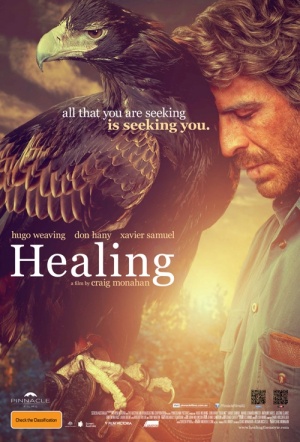 Australian drama about an inmate who, at the tail end of a 16-year sentence, is sent to a low-security pre-release prison with a special programme that pairs men with injured game birds. Co-stars Hugo Weaving (The Matrix trilogy).

Viktor (Don Hany, White Collar Blue) has almost given up on life by the time he's sent to the Won Wron rehabilitation centre. Case worker Matt (Weaving) decides to pair his two toughest cases - Viktor and Yasmine, a wedge-tailed eagle with a wingspan of two metres.

This is Weaving's third film with director Craig Monahan after The Interview and Peaches. Also stars Xavier Samuel (The Twilight Saga: Eclipse).

It would be incredibly easy - and unfair - to define Healing by what it is not. What it is, is a thoughtful, visually impressive, heart-warming tale. With his third feature film, and the third to star Hugo Weaving, Craig Monahan has explored the reflections and contrasts between some of the world's most beautiful birds and some of humanity’s biggest pariahs.

Watching it is an exhilarating experience.

The parallels between injured bird and flawed man work brilliantly in Healing.

There is an organic wholeheartedness to Healing that helps it avoid being twee.

The screenplay tries to embrace several inter-related themes, but fumbles the process.