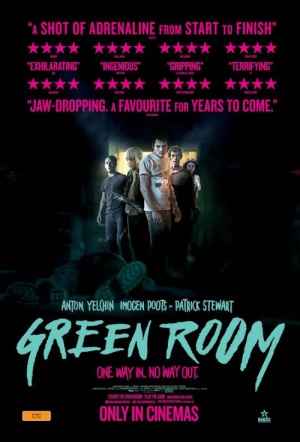 The director of cult hit Blue Ruin casts Patrick Stewart as a ruthless neo-Nazi in this confined-space thriller, targeting an innocent indie punk band who saw something they can't unsee.

Down on their luck rockers The Ain’t Rights are finishing up a long and unsuccessful tour, and are about to call it quits when they get an unexpected booking at an isolated, run-down club deep in the backwoods of Oregon. What seems a third-rate gig escalates into something much more sinister when they witness an act of violence backstage that they weren’t meant to see.

Now trapped backstage, they must face off against the club’s depraved owner, Darcy (Stewart), a man who will do anything to protect the secrets of his nefarious enterprise. But while Darcy and his henchmen think the band will be easy to get rid of, The Ain’t Rights prove themselves much more cunning and capable than anyone expected, turning the tables on their unsuspecting captors and setting the stage for the ultimate life-or-death showdown.

Punk rock and horror should go hand-in-hand – both need to be loud, fast and resolutely NSFW – but often the results are embarrassing. Just as writer/director Jeremy Saulnier brought humanity back to the revenge flick in 2013's Blue Ruin, here he brings proper scares and smarts to the punk-horror subgenre.

Characterization and emotional investment are in disappointingly short supply, while crucial tension is permitted to dissipate in an anti-climactic final third.

This is a brutal movie that finds unusual freedom in limitations...

Saulnier’s ability to take a well-trodden road and fill it with grisly surprises is quite something.

If you like your movies – and your music – nasty, brutish and short, but never gratuitous, then Green Room is for you.

Way more than crass exploitation. It's a B movie with an art-house core.

It's all put together with great skill, but never quite manages to deliver more than its modest, stripped-back story will allow.

As action, it's niftily executed, the suspense neatly built, and the shocks expectedly surprising.