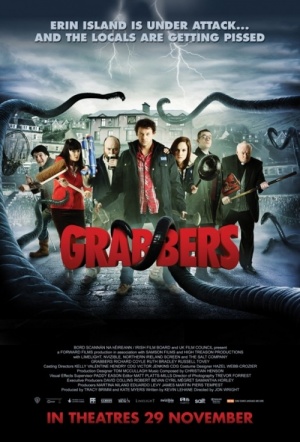 A giant tentacle-flailing monster appears off the coast of Ireland in this horror comedy, wreaking havoc on a small island community. The locals choose to fight back the only way they know how – by grabbing a weapon and a pint.

Ciarán O’Shea is a charming but heavy-drinking local Garda tasked with greeting Lisa Nolan, a straight-laced young officer who has just arrived to a small fishing village off the West coast of Ireland. Not that there’s much for them to do, aside from dealing with the occasional drunk, and that’s usually O’Shea himself. But strange doings are afoot: the crew of a fishing boat disappears, whales start appearing dead on the shore, a local lobsterman catches a strange creature in his trap. Soon it becomes clear to Garda O’Shea and Nolan that there’s something big out there, and that it’s hungry. It’s time to rally the villagers, arm the troops…and head to the pub!