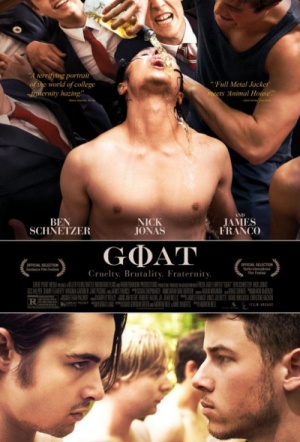 Intense drama, based on the bestelling memoir of a college freshman, about the disturbing reality of American college fraternities. Stars Ben Schnetzer (Warcraft) and Nick of the Jonas Brothers. Co-stars James Franco and co-written by David Gordon Green (Pineapple Express).

"Reeling from a terrifying assault, a 19-year-old boy enrolls in the same college as his brother and pledges his fraternity. Swept up in a world of shotgunning beer, all-night ragers, and hooking-up with nameless coeds, a protective shell forms to mask his insecurities. But as the hazing escalates in the name of 'brotherhood,' his loyalty to his brother is tested in brutal ways.

"Director Andrew Neel’s documentary background is evident as Goat resounds with searing authenticity - rarely has such raw and terrifyingly truthful masculinity been captured on screen. The result exposes the brutal and violent aspects of male culture that lurk beneath the surface of our seemingly controlled society." (Sundance Film Festival)

Goes far beyond disingenuous, and the resulting film falls far short of actually surprising those who already know a thing or two about fraternities.

The film is a pointed, astute and unflinching look at unbridled machismo and its consequences.

A penetrating consideration of the psychology of violence and its role in defining manhood.