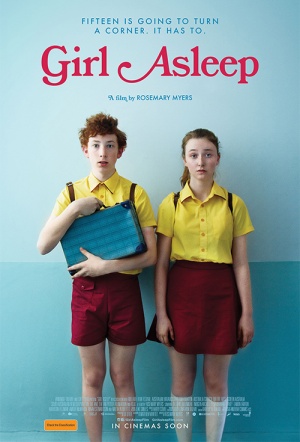 Critically-acclaimed debut from Australian filmmaker Rosemary Myers, a coming-of-age tale that journeys deep into the teenage mind. Nominated for the Crystal Bear for Best Feature Film (Generation 14+) at the 2016 Berlin International Film Festival.

"Greta is 14 years old and has just moved to a new town with her family. It’s tough, but at least she's found a soulmate at her new school: Elliott is an outsider like her, he's funny and sweet, maybe a bit childish too, and he wants to be her boyfriend. Her sister has already made it: she lives her own life. It wouldn’t be so bad if her parents hadn't got it into their heads to throw a surprise party for her. Given the choice, Greta would simply run away. In the mysterious forest behind the house lurk strange creatures and Huldra, the fearless warrior. A weird and wonderful coming of age tale, absurd and eerie, terrible yet lovely – just like the life of a 14-year-old when everything around is changing." (Berlin International Film Festival)

A strange, savvy, big-hearted teen adventure that feels perfectly pitched to its target audience as well as those of all ages in search of something unquestionably unique.

In fact it's in Myers's commitment to eccentricity that Girl Asleep - an art-house film made firmly with a teenage audience in its sight - finds its heart.

...a delightful first feature by Adelaide director Rosemary Myers that explores some familiar themes with great resourcefulness and charm.

Myers crafts an effervescent yet astute splash of teen life that delights the eyes, warms the heart and tickles the funny bone in equal measures.

[The] characters are so charming and funny, and the stylistic excesses handled with such aplomb, that this film... is a fresh-faced delight with all the makings of a local crowd-pleaser.

Charming and unique - a fresh take on adolescence.

Girl Asleep might be about an awakening, but it's not a sexual awakening, and this is one teen comedy in which, at long last, the geek doesn't get the girl.

Inventive and confidently executed... a bright and occasionally subversive take on teen growing pains that gives fresh legs to a familiar genre.