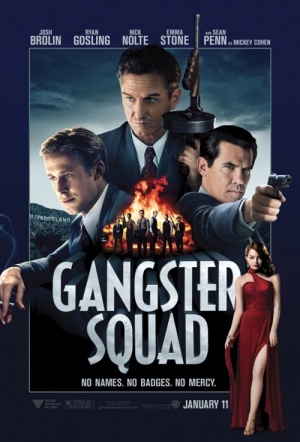 Ryan Gosling, Emma Stone, Josh Brolin and Sean Penn star in this 1940s chronicle of the LAPD’s battle with the East Coast Mob. Helmed by Zombieland director Ruben Fleischer. The story is based on fact, revealed in a series of LA Times articles by Paul Lieberman.

In late '40s LA, the ruthless, Brooklyn-born mafia king Mickey Cohen (Penn) wears the crown, spinning a fortune from drugs, guns, prostitutes and—if he has his way—every wire bet placed on America's west coast. Despite doing so under the protection of his mob, aided by corrupt local police and politicians, a small crew of LAPD outsiders led by Sgt. John O’Mara (Brolin) and Jerry Wooters (Gosling), come together to try and bring Cohen down - prepared to do whatever it takes, even if that means going beyond the letter of the law.

So catastrophically juvenile and style-fixated there is no detectable trace of any talent involved.

Flushes a classy cast... down the sinkhole of creative bankruptcy.

A fusillade of bullets and cliches...

So superficial it practically evaporates before our eyes.

Attempts to recreate mobster magic, but ends up fumbling into an endless amount of cliches and some horrid digital photography to boot.

Sleek, stylish but superficial. Easy on the eye, even easier on the brain, it doesn't last long in the memory.

Would have been more fun as an animated feature, with fanciful animals in the principal roles.

For all the guns and gore, it's as breezy and uncritical as a tale from the True Detective magazine that the cops can't help reading.

Little more than another Hollywood wannabe overshadowed by the legacy of "L.A. Confidential"...

A big waste of a lot of talent.

These are good actors, but aside from Brolin and Gosling, they're barely given any special moments of their own to make their marks here.

Sean Penn's not been this fun since Jeff Spicoli and there's plenty of rip-roaring action, but proves a minor entry in the annals of LA noir.