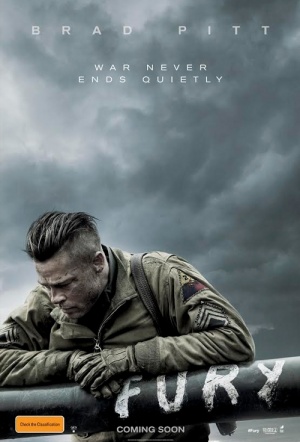 Brad Pitt is Sergeant Don "Wardaddy" Collier in this WWII action drama, the master and commander of a Sherman tank and her crew (Shia LaBeouf, Michael Peña and Jon Bernthal). The year is 1945, and Allied troops fight their way across German soil. But with many deaths still to come, it's no picnic for the crew, or the new recruit that joins them (Logan Lerman). From the writer and director of End of Watch.

Under Collier, the crew of the tank Fury have fought their way through Africa, across Europe and into Deutschland. The sole survivors of a pitched battle, they have little time to rest before being thrown back into the fray, clearing townships, rescuing outgunned GIs and taking on the waves of fanatical soldiers and terrified children that Hitler desperately throws at them.

Fury is the first major role for Shia LaBeouf since he famously started wearing a paper bag over his head. On the set of this film, Brad Pitt reportedly complained he was too smelly to share a tank with.

War is hell. And according to Fury it’s also really, really muddy. We’re talking Glastonbury levels of mud, though this version of World War 2 seems absent of any chavvy Englishmen. To be fair, that’s not too surprising, given director David Ayer’s tight focus on the American crew of the titular Sherman tank as it advances into Germany in the final year of the war.

Pitt plays a watered-down version of his 'Inglourious Basterds' character in this disappointingly bland look at a World War II tank crew.

Loud, intense, violent, relentless, Fury doesn't stop until the credits roll, thanks to Ayer's cracking direction and a committed cast. The best WW2 movie in some time.

Brad Pitt pulls along this gutsy, old-fashioned World War II epic by the sheer brute force of his charisma.

Within this gore-spattered, superficially nihilistic carapace is an old-fashioned platoon picture, a sensitive and superbly acted tale of male bonding under duress.

Fury is a punchy, muscular action film, confidently put together and never anything other than watchable.

Lives up to its title with its great ferocity, but at a certain point, it begins to feel like a macho fantasy.

A good, solid World War II movie, nothing more and nothing less.

A persuasive, warts-and-bolts depiction of warfare from the guts of a tank yoked to an overwrought, sub-Private Ryan account of innocence under fire - so a hit and a miss.

Scene: I Can't Do It