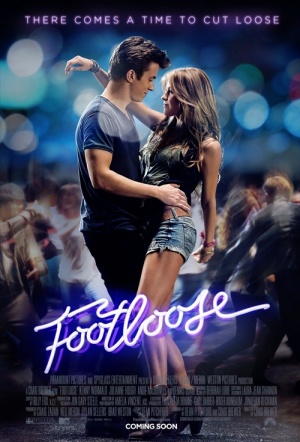 City boy Ren McCormack (dancer and newcomer Kenny Wormald) moves to the small southern town of Bomont and suffers serious culture shock. In Bomont, thanks to an uptight Reverend (Dennis Quaid, Frequency), dancing and rock music have been banned. Ren rallies the town's teens, including the Reverend's daughter (Julianne Hough, Burlesque), and rebels against the status quo.

2011Rating: M, for some teen drug and alcohol use, sexual content, violence and language116 minsUSA
ComedyDramaMusical

Paramount's Footloose reboot never quite cuts loose enough to distinguish itself from the original.

Star-crossed lovers Wormald and Julianne Hough can’t match Bacon and Lori Singer, but over-30s will tap feet and the Glee crowd will mime along.

Footloose is an anodyne example of Hollywood's fixation on remakes but it is slightly better than I expected.

Stepping into sacred shoes once worn by Kevin Bacon, Wormald handily owns the role for a new audience. Same goes for a terrific Miles Teller (Rabbit Hole) in the sidekick role of Willard so memorably originated by the late Chris Penn.

There have been far, far worse remakes out there. Harmless, feel-good fun.