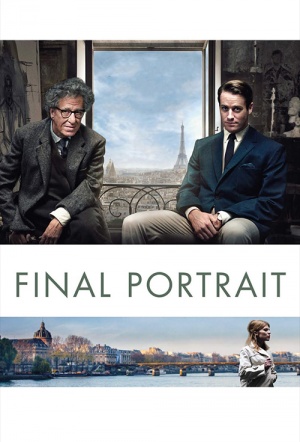 Geoffrey Rush is artist Alberto Giacometti in this comedy about his efforts to paint a portrait of an old friend, played by Armie Hammer.

"It is Paris in 1964 and Giacometti is a celebrated artist whose works are fetching extremely high prices. When he encounters his old friend, the American critic James Lord (Hammer), Giacometti asks him to sit for a portrait. Flattered, Lord agrees and changes his flight back home. But the chaos of Giacometti's studio and life takes over, from the large amounts of cash stashed in secret hiding places and constant arguments with his wife to a scandal involving his mistress. Giacometti, plagued by self-doubt, insists on frequent diversions, and Lord's flight is postponed again and again." (Sydney Film Festival)

Based on Lord’s book A Giacometti Portrait, Final Portrait avoids the usual biopic pitfalls, yet succumbs to the half-baked slightness that can plague talky, miniaturist chamber pieces.

In "Final Portrait," Stanley Tucci, directing his first film in 10 years, takes the biopic to an even more exquisitely homespun level of miniature close-up.

A stellar performance from Geoffrey Rush centres this diverting glimpse into the chaotic life of a great artist.

Stanley Tucci has created a very amusing, astringent chamber piece of a movie, performed with sympathy and wit by Geoffrey Rush and Armie Hammer.

Turns out watching paint dry can be fun.

Weirdly feels both once over lightly and somewhat slow all at once.

This relatively concise passion project won't, in the end, stop viewers getting the cramps that come with much longer sittings.

Makes for a narrative with little consistent forward momentum and an anticlimactic ending, though the film remains agreeable thanks largely to Rush's flavourful performance.

...a subtle and low-key affair about the great Swiss-Italian artist Alberto Giacometti.

Sensibly dramatising a few representative days rather than Giacometti's whole life, this may seem slight, but there's a lot to dig into here - and Rush hasn't had a showcase this good in years.