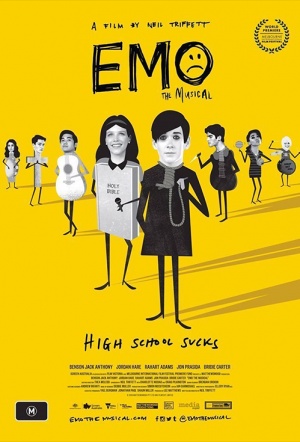 "Ethan (Anthony), a sensitive and depressed Emo boy with suicidal tendencies, plays hard doom and gloom rock with the like-minded, in a band where good moods are strictly taboo. Ever chipper classmate Trinity (Hare), for her part, prefers to use her sweet voice to sing praises to the Lord in her Christian youth group. Trinity and Ethan - nobody will ever understand this unlikely match, let alone accept it! And yet that's exactly what comes to pass when their two paths cross for the first time. The impossible bond they share sets a number of events in motion at their crazy little school." (Berlin International Film Festival)

A confused emo guy and a committed Christian girl try to untangle their feelings for each other in this fitfully amusing adolescent tuner.

The tone and execution is pretty infantile, suggesting something too childish for adults or even teenagers, with an intellectual context too serious for kids.

It might seem several years too late to skewer the emo subculture with the appropriate bite or relevance, but a combination of good intentions and energetic execution largely pays off in Neil Triffett's Emo The Musical.

Emo: The Musical is kind of a hot mess. But it's undeniable that there's also something just so damn likeable about these good-looking youngsters warbling about their teenage troubles.

In terms of hitting that sweet spot between acknowledging the seriousness and ridiculousness of a teenage social circle, Emo: The Musical gets it right.