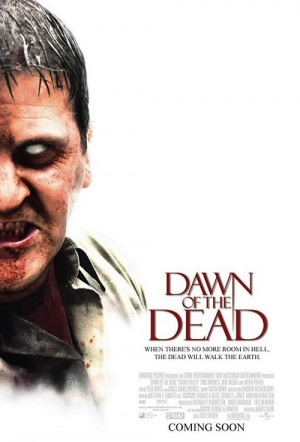 Remake of George A. Romero’s 1978 horror masterpiece that sees a small band of survivors barricade themselves in a shopping mall during the zombie apocalypse. The feature debut of Zack Snyder, who would go on to direct comic book blockbusters 300, Watchmen and Man of Steel.

Waking up next to her husband in a seemingly normal morning, Ana (Sarah Polley) is quickly introduced to a world thrown into chaos, witnessing the devastation first-hand when her beloved transforms into a crazed flesh-eater. Narrowly escaping her torn neighbourhood, Ana happens upon a cop (Ving Rhames) and other survivors. Together, they fortify themselves inside a mall, building a small community inside the complex for months on end as the outside world surrenders to the living dead.

The script was co-written by James Gunn, who would later go on to write and direct Marvel mega-hit Guardians of the Galaxy. He also wrote and directed 2010’s humble hit Super, which you should also see.

My only complaint is that its plot flatlines compared to the 1979 version, which was trickier, wittier and smarter.

Don't leave before the final frame -- if you're still breathing.