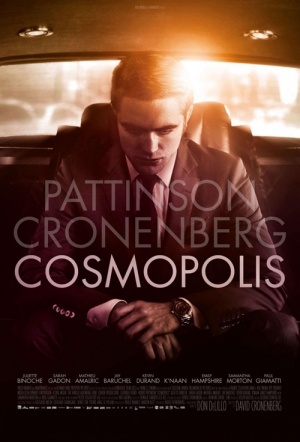 David Cronenberg and Robert Pattinson team up for this ultra-violent near-future trip through Manhattan, following a 28-year-old billionaire whose world breaks apart over a single day. Based on the novel by Don DeLillo.

While being chauffeured to a haircut, Eric Parker (Pattinson) witnesses the gradual demise of his empire when a bet on a heavy exchange rate goes against him. At the same time, a chaotic commotion ripples through the streets of New York. Parker's paranoia reaches an apex when he discovers he's the target of an assassination.

An eerily precise match of filmmaker and material, Cosmopolis probes the soullessness of the 1% with the cinematic equivalent of latex gloves.

It might just be the weirdest movie of the year.

Mr. Cronenberg's direction throughout "Cosmopolis" is impeccable, both inside the limo and out.

An agonisingly self-conscious and meagre piece of work.

A flawlessly directed film about enigmatic people who speak in morose epigrams about vague universal principles they show no sign of understanding.

DeLillo's brilliant analysis of the destructive power of wealth that took such seductive hold on page has a tough time gaining traction on screen.

Beyond its withering critique of contemporary capitalism, Cosmopolis is also fascinated by that ongoing Cronenbergian concern: the limitations and mutations of the human body.

An airless and inert expression of a capitalist kingpin's odyssey across a threatening New York City.