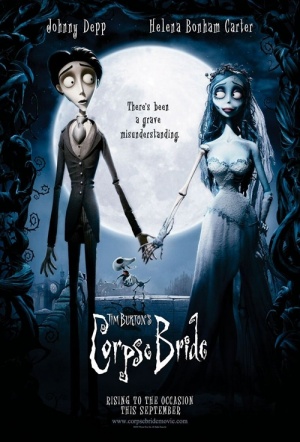 Tim Burton, creator of The Nightmare Before Christmas, directs this 2005 stop-motion animated gothic fantasy set in the late 1800s about a timid young man (voiced by Johnny Depp) caught between the woman he was meant to wed (Emily Watson) and the undead bride he accidentally married (Helena Bonham Carter).

Desperate to get into Victorian high society, a middle-age couple pressure their son Victor to marry Victoria. But when Victor flees the practice wedding, he accidentally places the ring on the finger of a deceased – yet lively – bride instead, who takes him away to the rather high-spirited Land of the Dead. Halted by his own awkwardness, Victor fumbles to untie this misunderstanding, but ends up learning about the unfortunate events that put the Corpse Bride into her grave.

The puppets’ heads were adjusted and manipulated by the animators via clockwork and hidden keys, as opposed to the standard replaceable facial features. However, this technique is reportedly even more painstaking, giving one puppeteer recurring nightmares of him using this practice to readjust his own face.

An endearingly schizoid Frankenstein of a movie, by turns relentlessly high-spirited and darkly poignant.

As fun as the film occasionally is, it just plays like a compilation of greatest hits.

A sweet and visually lovely tale of love lost.

A precious thing, if likely to please refined aesthetes and odd children rather than win over Pixar-sized crowds.

If you have a pulse, you'll love it.