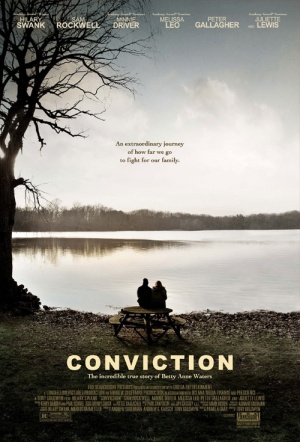 Kenny is arrested for murder and sentenced to life in 1983. Convinced of his innocence, Betty Anne puts herself through high school, college and, finally, law school in an 18 year quest to free Kenny. With the help of best friend Abra Rice (Minnie Driver), Betty Anne pores through suspicious evidence mounted by small town cop Nancy Taylor (Melissa Leo), meticulously retracing the steps that led to Kenny's arrest.

Although fiercely committed performances by Hilary Swank and Sam Rockwell provide director Tony Goldwyn's film with a core of emotional integrity, a less heavy-handed, more informative approach would have served them and the audience better.

Swank and Rockwell elevate a solid drama that tells its tall tale with, yes, conviction. It’s not exactly the whole truth, though.

It would be easy to dismiss Conviction on the ground that it plays like a made-for-television movie, but the truth is that, as often as not, movies made for the small screen are better than this: braver, darker, more willing to explore odd corners of feeling.

In Hilary Swank, the film finds the right actress to embody gritty tenacity.

The film is in the tradition of fighting-the-system stories drawn from real life such as "Erin Brokovich," and its powerful emotional appeal should draw a substantial grownup audience.

It's okay in a TV movie way, but disappointing given all the obvious potential of the real story.

Serious film-of-the-week, Conviction is a slightly jumbled telling of the true story of brother and sister Kenneth and Betty-Anne Waters.