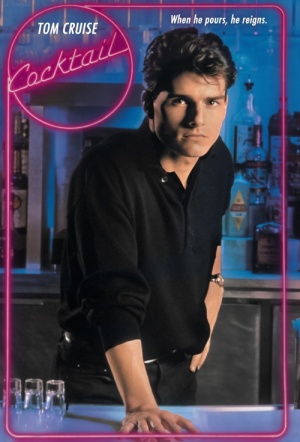 Kiwi director Roger Donaldson's critically-panned, 1988 comedy-romance starring Tom Cruise as a bartender with the right stuff. "When he pours," goes the tagline, "he reigns".

Brian (Cruise) is an ambitious bartender who, with the help of a seasoned pro, becomes the toast of Manhattan's Upper East Side. But when he moves to Jamaica and meets an independent artist, their vivid romance brings a new perspective to the self-centered bartender's life.

An inane romantic drama that only a very young, very naive bartender could love. How it got that way is difficult to understand.

The more you think about what really happens in Cocktail, the more you realize how empty and fabricated it really is.

Arm wrestling and hamburger building have been exhausted as backgrounds for movies, so it was probably inevitable that bartending would be next. But nothing quite prepares you for the hamburger that Cocktail makes of an old and relatively honorable profession.

Cruise oozes as much charm as in Top Gun and The Colour of Money, but the mix of bar-acrobatics and Caribbean love isn't anywhere near strong enough to get you drunk.