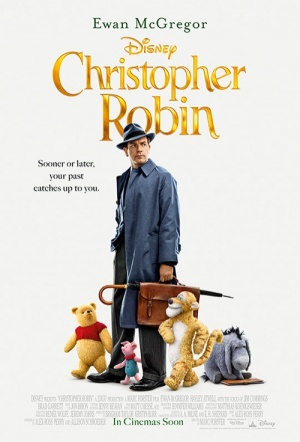 Winnie-the-Pooh revisits his old pal Christopher Robin (Ewan McGregor), now an overworked family man, and helps him to rediscover the joys in life.

Christopher Robin's work has become his life, leaving little time for his wife and daughter. Christopher has all but forgotten his idyllic childhood spent with a simple-minded, honey-loving stuffed bear and his friends. But when he is reunited with Pooh, now tattered and soiled from years of hugs and play, their friendship is rekindled, reminding Christopher of the endless days of childlike wonder and make believe that defined his youth, when doing nothing was considered the very best something. Following an unfortunate mishap with Christopher Robin’s briefcase, Pooh and the rest of the gang including Piglet, Eeyore and Tigger, step out of the forest and venture into London to return the crucial possessions… because best friends will always be there for you.

Christopher Robin contains a melancholic image of Winnie-the-Pooh standing alone at the head of a dirty and dilapidated outdoor dinner table, with no friends and no company. It evokes the macabre 1985 headtrip Return to Oz, which follows a catatonic and ECT-treated Dorothy Gale to a crumbling yellow brick road and the remnants of a destroyed Emerald City. Oz is a film about childhood ruined by the pernicious forces of adulthood, an idea Christopher Robin chips away at from a different, hopeful perspective – proposing that the purity of our formative years can restore the moral and creative equilibrium of a cruel grown-up world.

Only a grown man who has retained his boyish charm could look believable on this surreal quest to reconnect with his childhood soft toys. Ewan McGregor carries it off admirably in this Disney fantasy centred on a grown up Christopher Robin, manager in a failing London luggage company.

The movie basically ingratiates itself with kids by scolding adults for losing track of what’s important, and yet, both in the 1930s and today, a responsible father doesn’t really have the option of quitting his job.

A well-played political message about economic equality responsibly caps off the fable, but Pooh's luxurious yet outdated philosophy about "doing nothing to achieve something" sticks out like a heffalump in the room.

Once Christopher Robin softens its insufferable, needlessly cynical conception of the title character, it offers more or less what a Pooh reboot should: a lot of nostalgia, a bit of humour and tactile computer animation.

It might well get under the skin of a few Mums and – especially – Dads. But the nippers sitting next to them are more likely to be crying with boredom than ennui.

...while it provides lashings of thought-provoking adult drama, I'm still unsure just how suitable it is for kids.

Every time things start to get goopy, we get silent-comedy slapstick like Pooh destroying the Robins’ household.

Mostly it's all just a bit too easy.

This Bear of Very Little Brain and friends are rendered with a gently accessible old-school childish delight and make for a great school holiday watch.

The lessons Christopher must learn - don't work too hard, hold your most cherished memories close, love your family and friends above all else - are nothing if not obvious. And, much like Pooh himself, always worth revisiting.

Christopher's lengthy two-hander scenes with Pooh quickly wear out their welcome; what at first is agreeably amusing shortly becomes grating, then just tedious.

Everyone’s trying hard, but they can’t quite live up to the particularly gentle, warm tone of Pooh himself.