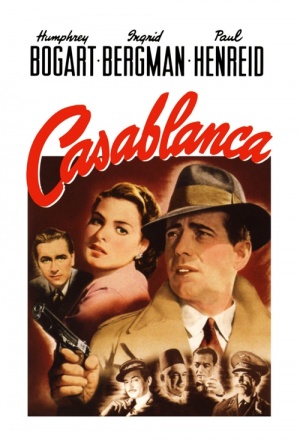 As time goes by, the appeal of Casablanca shows no sign of diminishing. Originally intended as a WWII propaganda movie, it remains a marvellous blend of bittersweet romance, wisecracking comedy and wartime intrigue. Wonderfully acted by its cast, it's the story of a laconic nightclub-owner Rick (Humphrey Bogart), whose life in Casablanca is shaken up by the arrival of old flame Elsa (Ingrid Bergman) with her Resistance leader husband.

Despite a famously troubled production (including a conveyor belt of scriptwriters and a failure to secure the likes of Ronald Reagan), the finished film, directed by Michael Curtiz, unfolds with effortless professionalism. Indeed, when re-watching Casablanca, one is reminded how many of its choice lines - "Round up the usual suspects!", "Here's looking at you kid" - have entered our collective cultural consciousness, together with the all too-familiar tones of that As Time Goes By theme song. -BBC

Whether you return to Casablanca for a nostalgia fix, a guilty pleasure or for the waters, you can be certain there'll be something you didn't notice last time out.

The most sociable, the most companionable film ever made. Life as an endless party.

It plays like a favorite musical album; the more I know it, the more I like it. The black-and-white cinematography has not aged as color would. The dialogue is so spare and cynical it has not grown old-fashioned...

Even hardened cynics who might be impelled to dismiss it as a collection of button-pushing clichés will most likely get swept up in the all the unabashed romance.

Unrequited love, midgets, some of the most quoted dialogue ever written, and Dooley Wilson's ultra cool jazz stylings on the ivories - "Casablanca" simply has it all...