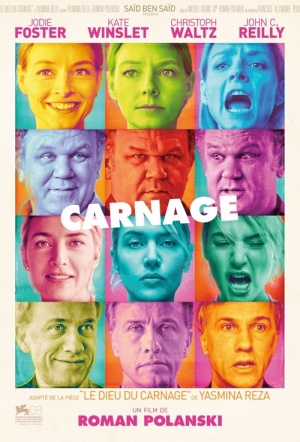 Kate Winslet, Christoph Waltz, Jodie Foster and John C. Reilly play two sets of parents who meet after their sons are involved in a schoolyard brawl. It seems, however, that childishness doesn't diminish with age as the initially cordial meeting dissolves into chaos. The action is set entirely within a city apartment.

The real battle in Roman Polanski's brisk, fitfully amusing adaptation is a more formal clash between stage minimalism and screen naturalism, as this acid-drenched four-hander never shakes off a mannered, hermetic feel that consistently betrays its theatrical origins.

A four-way of furious awkwardness played with consummate skill. But, given the talents involved, couldn’t we expect something just a little more substantial?

“Carnage,” in any case, should not really be a movie. It should be a parlor game.

The tensions are satisfyingly vicious and unpleasant – mostly while still unspoken.

This is not a particularly memorable film, but Polanski brings a great deal of skill to its staging, and it looks as if the actors enjoy themselves.

Not only is Polanski very much in his comfort zone with this material, he also has cast it impressively, staying away from any of the actors who played the parts in either its London or New York productions...

Snappy, nasty, deftly acted and perhaps the fastest paced film ever directed by a 78-year-old... delivers the laughs and savagery of the stage piece.

A quartet of pitch-perfect performances from a cast uniformly at its career best, together with a director on shockingly mischievous top form, this is a shot of pure, exhilarating cinematic malice.

Polanski wants to rub our collective noses in the ugliest elements of humanity. Yet by the time everyone in Carnage has revealed themselves, we’re left not with flawed human beings, but with monsters of banality whose company represents a brutal form of punishment in itself.