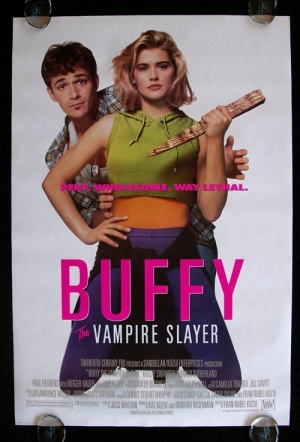 '90s poster boy Luke Perry and California babe Kristy Swanson star in this campy horror cheese-fest. After discovering vampires living amongst us, a popular high school girl answers the call to hunt and defeat them. From writer Joss Whedon. The film would spawn the considerably darker TV series (1997-2003).

Buffy is a typical teen, whose main goal in life is to “marry Christian Slater and die”, when she is approached by the mysterious Merrick (Donald Sutherland) who informs her that she is 'The Slayer' and it is her destiny to rid the town of its vampire population. The no-nonsense Buffy gets down to training, with starry-eyed love interest Pike (Luke Perry) following in her wake. It's not long before head vamp Lothos (Rutger Hauer) and his posse of undead goons show up to put in a surprise appearence at the school prom.

A bloodless comic resurrection of the undead that goes serious just when it should get wild and woolly.

A slight, good-humored film that's a lot more painless than might have been expected.

Enjoyable, but now basically a footnote to the TV series.