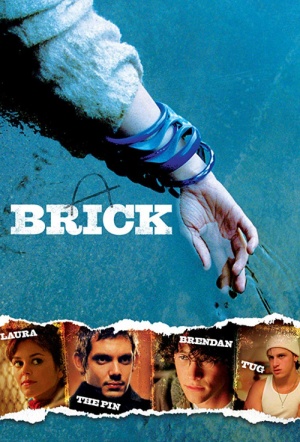 After receiving a panic-stricken phone call from his ex-girlfriend Emily (de Ravin) - just before she turns up dead - high-school loner Brendan (Gordon-Levitt, after his brilliant turn in last year's 'Mysterious Skin') sets out to infiltrate the illicit cliques she left him for. Brendan becomes embroiled in the web of vice & deceit that surrounds Emily's murder.

LA Weekly: "A fusion of teenage confidential and hard-boiled film noir set in the mean corridors and power cliques of high school. The existentialist vibe of film noir becomes a perfect metaphor for the twin evils of malice and alienation at high school." Or, as the NY Times put it: "the milieu of 'Beverly Hills 90210' and 'The OC' goes noir".

The hair may thin considerably under Brick's hat after a while, and Hammett redone remains Hammett half done, but while the plates are in the air, it's a spectacle of nerve...

A flashy cinematic stunt perpetrated by Rian Johnson, dispenses with the adolescent gibberish of the here and now to graft the hard-boiled art of Dashiell Hammett onto an upscale Southern California high school: the milieu of "Beverly Hills 90210" and "The O.C." goes noir...

"Sensational" is the word for Joseph rdon-Levitt (equally striking in Mysterious Skin), who stars as Brendan, the teen outsider who becomes a budding Bogart...

Brick keeps its hip wits about it long enough to show that high school noir is the new black...

With brilliant dialogue out of the 1940s and graceful visuals that add depth to the dark comedy, Johnson debuts with a smart, self-assured feature that portrays adolescence like no other film has...

With a superb lead turn by rising star Joseph Gordon-Levitt, Johnson's debut is a smart, original neo-noir that works as an ingenious mindgame as well as a slick Hollywood calling card...

With his low-budget debut Brick, director Rian Johnson deconstructs traditional film noir and rebuilds it in a modern landscape. Gone are the trilby-donning tough guys in dark alleys in favour of grungy teens sloping through the halls of a California high school. Thankfully though this isn't just another teen movie with Joseph Gordon-Levitt playing it straight as the amateur private dick. The story lacks a memorable sucker punch at the end, but it's tough not to like for sheer guts...