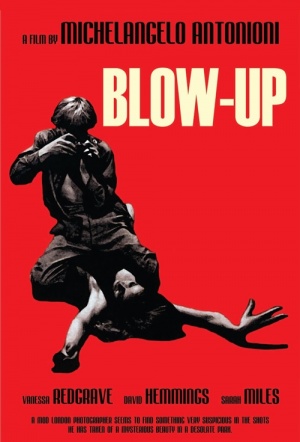 Michelangelo Antonioni's first English-language film. A portrait of swinging '60s London under the guise of a thriller, it follows a fashion photographer (David Hemmings) who unwittingly takes a photograph of a murder. Co-stars Vanessa Redgrave. Winner of the Palme d'Or at Cannes 1967, time has only raised Blow-Up's stature as a cinema classic.

The movie's counterculture themes and explicit content were in defiance of America's moral censorship guidelines (the Hays Code), and its success was a major factor in its downfall. The Hays Code was abandoned in 1968 and replaced with today's MPAA ratings.

There may be some meaning, some commentary about life being a game, beyond what remains locked in the mind of film's creator... it is doubtful that the general public will get the 'message' of this film.

As often with Antonioni, a film riddled with moments of brilliance and scuppered by infuriating pretensions.

A fascinating picture, which has something real to say about the matter of personal involvement and emotional commitment in a jazzed-up, media-hooked-in world so cluttered with synthetic stimulations that natural feelings are overwhelmed.

Whether there was a murder isn't the point. The film is about a character mired in ennui and distaste, who is roused by his photographs into something approaching passion.

Despite its thriller hook, Blow-Up is less a mystery than a portrait of swinging alienation.

As maddening to watch as it is absorbing.