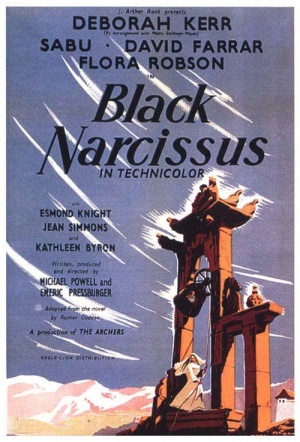 Powell & Pressburger's 1947 psychological melodrama about the tensions that brew within a convent of nuns in an isolated Himalayan valley. Jack Cardiff won the Oscar for Best Cinematography (colour) for his stunning work on the film.

Sister Clodah (Deborah Kerr) is assigned to take over a cliff-side building, abandoned by a religious Brotherhood, and establish a convent. Aided by four fellow Anglican nuns, she seeks to 'tame' the natives through education, hospitality and conversion. However, their objectives cause tension to brew between them and the locals, with the sisters forced to confront their own demons as well.

"Finding themselves disturbed by all manner of natural phenomena - extremes of temperature, weather, and a maverick local expat's (David Farrar) rugged charms - it is only a matter of time before hardship and temptation gradually draw the women away from their vocation, and they descend into doubt, jealousy and madness." (BBC)

Production has gained much through being in color. The production and camerawork atone for minor lapses in the story, Jack Cardiff's photography being outstanding.

Powell and Pressburger may have a picture that will disturb and antagonize some, they also have an artistic accomplishment of no small proportions.

Run, don't walk to see this 1947 classic... The studio sets and backdrops are superbly and still convincingly rendered, and the film looks more beautiful than ever.

Sexual tension hangs in the air as the wind blows and native drums beat, but it’s on a visual level that the film excels.

A masterly exploration of the dangers of ambition, British reserve, and unbridled emotion.