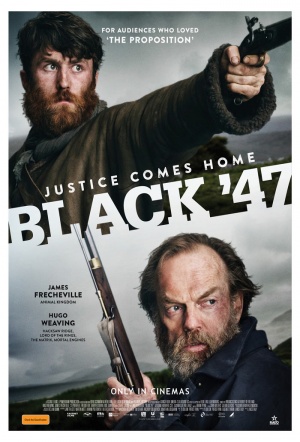 Hugo Weaving and James Frencheville (Animal Kingdom) lead this Western-like revenge thriller set in Ireland during the Great Famine. Played out of competition in Berlin and was officially selected for the Toronto International Film Festival.

"It is 1847 and Feeney (Frecheville) returns to his home in the west of Ireland after having fought for the British army abroad. It is two years into the famine and one million people have already perished, including Feeney’s mother. His home, meanwhile, has been rendered uninhabitable and his brother has been hanged by the British. Feeney had planned to relocate to the US, but the horrors and injustices to which he bears witness steer him toward another path — one that will find him exerting his wrath upon officials, collaborators, and others in power. A four-man crew is dispatched to stop Feeney, among them Hannah (Weaving), who fought alongside him. Hannah, too, has run afoul of the law and joining the hunt for his former comrade is his only hope of averting his own death sentence." (Toronto International Film Festival)

It's all deeply silly stuff, but within an eerily profound milieu.

Hangs suspended for the most part in an über-glum middle ground that allows neither its emotional or visceral gambits to properly connect.

Since this is a rare feature film to treat the Irish famine, it's a little odd that it tilts so heavily toward a genre exercise. But as a genre exercise, it's pretty potent.

It is a harrowingly effective film, though flawed by the actions of Weaving’s officer being unconvincingly motivated at the end...