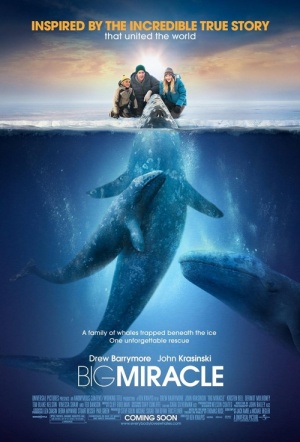 A family of three gray whales trapped beneath the ice in Alaska becomes international news in this rescue adventure, starring Drew Barrymore, John Krasinski and Ted Danson. Based on the Tom Rose novel Freeing the Whales, itself inspired by 1988's Operation Breakthrough.

Reporter Adam (Krasinski) is about to be unwillingly reassigned out of Alaska when three gray whales surface in an ice hole. Covering the story gives him an excuse to stay but when it becomes apparent the whales are trapped, his puff piece becomes big news. Spearheading the rescue effort is Greenpeacer Rachel (Barrymore) who has to first battle and then unite international governments, oil tycoons and Inuit locals to save the three trapped whales.

While rooting for the marine mammals (and wishing for more footage of them-and even of their animatronic incarnations), your heart will also go out to the cast, stuck even more pitiably in syrupy manufactured crises.

Given the abundance of one-dimensional human portrayals, it becomes apparent that a documentary on the subject might have been more powerful.

There may not be a second of say, Whale Rider's lyricism (that's still the best whale movie out there), but this energetic family movie is less insipid than it looks.

Big Miracle gets off to a shaky start, but once revved up, it becomes an involving work-against-the-clock-and-the-odds action movie.

The makers attempt to coat their fascinatingly bitter pill with saccharine. They are, however, only partially successful.

The whales themselves look like they are about to die of boredom.

Big Miracle shouldn't really work, but it does.

Big Miracle is harmless enough, but what's annoying about it is its aura of fake activism.

The sledgehammer emoting should let you know you're in a family drama.

Whale fans will blubber, but uneven Miracle flounders in its hunt for narrative focus.

Under its crowd-pleasing exterior lies an undercurrent of bracing cynicism.

Clip: We Are Whales

Clip: On the Move