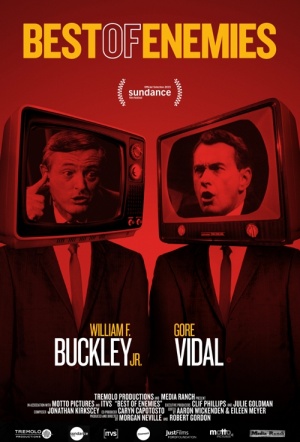 Documentary looking back at televised debates in the US between Gore Vidal and William F. Buckley during the Democratic and Republican National Conventions of 1968. For ten nights, the ideologically opposed intellectuals squared off, in a no-holds-barred contest of ideas and insults that helped shape the combative style of political coverage right through to the present.

Footage from their debates sits alongside archival content and new interviews that give further context to how these shows shaped Western political culture. Co-director Morgan Neville previously won an Oscar for Twenty Feet from Stardom.

“William F. Buckley, Jr. was a leading light of the new conservative movement. A Democrat and cousin to Jackie Onassis, Gore Vidal was a leftist novelist and polemicist. Armed with deep-seated distrust and enmity, Vidal and Buckley believed each other’s political ideologies were dangerous for America. Like rounds in a heavyweight battle, they pummeled out policy and personal insult—cementing their opposing political positions. Their explosive exchanges devolved into vitriolic name-calling. It was unlike anything TV had ever broadcast, and all the more shocking because it was live and unscripted. Viewers were riveted. ABC News' ratings skyrocketed. And a new era in public discourse was born.” (Sundance Film Festival)

The on-camera clashes are vividly and entertainingly recounted in this fascinating documentary.

The arguments about sex, war, race and culture have hardly quieted since 1968. Buckley and Vidal may rest in peace, but the rest of us have stayed plastered.

These debates are a fascinating, lost minuet of personal and political disdain.

Fleet, brutally funny and ultimately mournful for the lost art of informed public intellectuals brandishing wounding insights, the film is a fizzy bath of expertly organized archival footage and commentary ...

For American viewers of an intellectual/historical persuasion, there could scarcely be any documentary more enticing, scintillating and downright fascinating than Best of Enemies.

Outstanding account of a pivotal moment in small-screen history.