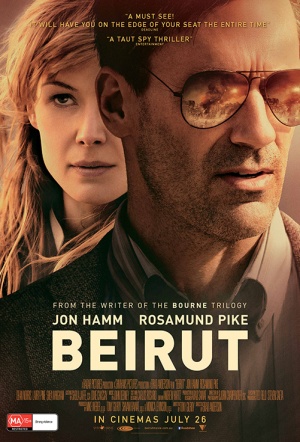 Jon Hamm is a former U.S. diplomat and negotiator returning to Beirut to save a former colleague in this political thriller. Co-stars Rosamund Pike and Breaking Bad's Dean Norris. Brad Anderson (The Machinist) directs a screenplay by Tony Gilroy (Rogue One and Bourne writer, director of Michael Clayton).

"Mason Skiles (Hamm), a top U.S. diplomat, left Lebanon in the 1970s after a tragic incident. Ten years later, the CIA calls him back to a war-torn Beirut with a mission only he can accomplish. Meanwhile, a CIA field agent who is working undercover at the American embassy is tasked with keeping Skiles alive and ensuring that the mission is a success. Without knowing who is on his side and with lives on the line, Skiles must outmaneuver everyone to expose the truth." (Sundance Film Festival)

Across seven seasons of Mad Men, Don Draper could sell almost anything. Beyond the role that made him a star, however, Jon Hamm hasn’t had the same good fortune. His most convincing work has remained on the small screen, in comedic supporting parts in everything from 30 Rock to Wet Hot American Summer: First Day of Camp to Unbreakable Kimmy Schmidt to Toast of London – but with Beirut, the actor gets the best cinematic leading role of his career.

Mostly the film trades in an agreeably old-school form of cinematic espionage intrigue.

Mostly the film trades in an agreeably old-school form of cinematic espionage intrigue.

The absence of Arab voices beyond those of the terrorists further flattens a movie that never fully takes satisfying shape.

Like any good spy tale, there's the wounded man in the center, and [Jon] Hamm (mostly bouncing off his CIA handler Rosamund Pike) has got the hollow hero thing down after seven seasons of Mad Men.

Jon Hamm adds movie-star class and a world-weary Don Draper touch to this mediocre spy thriller containing plot twists you may think are reductive of the Muslim world. You're not wrong.

Gilroy is a master at laying out a twisty plot, and Anderson directs with the kind of verve that enables almost all the twists to hit us with the force of surprise.