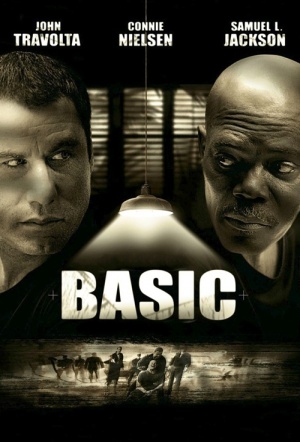 John Travolta and Samuel L. Jackson lead this thriller mystery following a DEA agent’s search for an Army drill sergeant and several of his cadets, who all disappear after a training exercise turned into a bloodbath. Directed by John McTiernan (Die Hard) from an original screenplay by James Vanderbilt, who would go on to write The Amazing Spider-Man and the RoboCop reboot.

The picture feels far more dedicated to the proposition that a mystery can never have enough twists than it does to plausibility or dramatic integrity. But the teasing tale is told with such dispatch it will carry willing audiences along.

Someone decided to put Rashomon in a Cuisinart along with A Few Good Men, The Usual Suspects and A Soldier's Story, and hit the pulverize button while forgetting to replace the top.

There are no words to say how deeply stupid and ridiculous this film is.

By the end, I wanted to do cruel and vicious things to the screenplay.

An overly mechanical screenplay with little on its mind other than deceiving viewers.

It's difficult to imagine how this could actually be any worse. It manages to spit you out in a poisonous mood somewhere in the hinterland between bored and irritated. Basically bollocks.