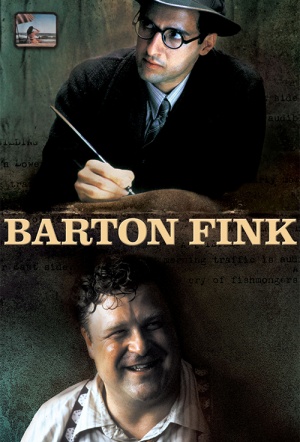 In this Palme d'Or winning Coen brothers comedy-drama, a renowned New York playwright (John Turturro) is enticed to California and discovers the hellish truth of Hollywood.

"Barton Fink is a young playwright in New York in 1941 who enjoys an overnight success with a drama celebrating the common man. Hollywood takes notice and enlists him to write wrestling pictures for Wallace Beery. "Barton Fink" chronicles his struggle with writer's block, with Hollywood, and with [a] neighbour in his hotel who shows Barton something about the darker side of wrestling, and of life." (Cannes Film Festival)

Scene after scene is filled with a ferocious strength and humor.

Somehow everything coheres, thanks to the Coens' superb writing and assured direction, and a roster of marvellous performances. The result works on numerous levels, thrilling the mind, ears and eyes, and racking the nerves.

It's an exhilarating original.

It's an assured piece of comic filmmaking.

...the feeling is inescapable that the film is adding up to much less than the sum of its parts. But when the parts are so enticing, and presented with such brazen assurance, you find yourself wondering how much it really matters if they add up at all.

Barton Fink is the ultimate in intellectual ballast, and with him the Coens have created a genuinely believable and multi-faceted character, while giving us a thumping good story that never lets up in its humour, pathos and intrigue.