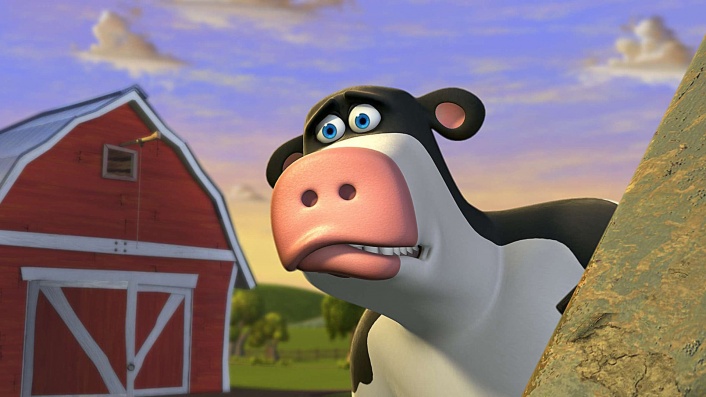 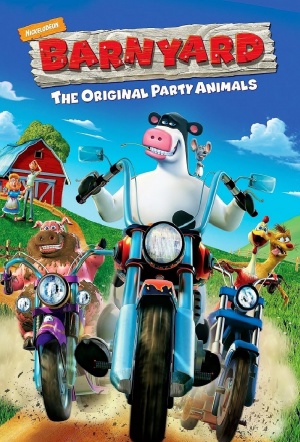 Confirming a suspicion held by many pet owners, CG animated Barnyard shows that while us clueless humans are away, animals walk (on two legs) and talk, sing, dance and party hearty.

On the farm, it seems there's only one really serious quadruped on the entire spread: Ben the Cow (Sam Elliott), the acknowledged leader and vigilant protector of the animal population. At night, as the farmer blissfully slumbers, Ben keeps watch for marauding coyotes while the other animals - including Otis (Kevin James), Ben's gleefully irresponsible son - whoop it up.  Newly arrived is Daisy (Courteney Cox), a recently widowed and very pregnant cow. When Ben is no longer able to guard the farm against Dag the Coyote (David Koechner) and his companions, Otis is forced to grow up fast and heed his father's motto: "A strong man stands up for himself; a stronger man stands up for others."

One of the film's few virtues is Danny Glover as the voice of Miles the mule... Ultimately, however, Barnyard fails to create even a franchise-worthy amount of cute; but then again it is hard to think of cows as appealing when they're drawn walking around on two legs, proudly showcasing their glaringly pink udders...

Even an advanced case of critter fatigue shouldn't stop you from rushing out to see this delightfully cheeky animated tale...

While youngsters might enjoy the movie, more discerning tweens, teens and adults will not be as easily amused...

Barnyard isn’t a complete waste of time, it’s just too familiar. We can praise Oedekerk for making an animated feature where the characters and backgrounds still resemble animation instead of real life. If only we haven’t seen countless animated films involving talking animals disguising themselves from humans prior to now, this film wouldn’t feel so much like we’re charting on familiar waters. Its like a generic Chicken Run only without the planned escape, brilliant humor, and gender correct anatomy on each of the animals...