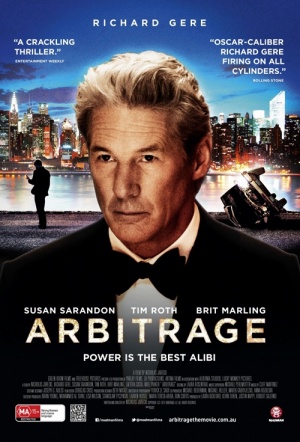 Talent in finance has made Robert (Gere) a portrait of success in American business, but on the eve of his 60th birthday he finds himself desperately trying to sell his trading empire to a major bank before the depths of his fraud are revealed. Juggling family, business and crime, a small slip-up arouses the suspicions of a local Detective (Roth) as Miller is forced to confront the limits of his own moral duplicity.

Between this cast and the conviction Jarecki brings to the table, the film feels incredibly accomplished for a first feature.

Amazingly, Gere keeps it all together, via a kind of seething anti-rage that speaks reams to the character's survival instincts.

Gere is being talked about as an Oscar contender - he's never been nominated. January is a long time off yet, but his name is certainly worth putting on the long list.

Gere is one of cinema's great walkers, graced with a suggestively predatory physical suppleness, and he slips through the movie like a panther. He's the film's most deluxe item.

Hitchcock called his most familiar subject "The Innocent Man Wrongly Accused." Jarecki pumps up the pressure here by giving us a Guilty Man Accurately Accused, and that's what makes the film so ingeniously involving.

Though it teeters at times on the edge between potboiler and melodrama, 'Arbitrage' benefits from a notable lack of sympathy for Gere's Gordon Gekko-like Miller. Rather than seeming pat, Jarecki's straightforward cynicism is pointed and purposeful.

A tense and chilling horror story for financially fraught times.

Nothing about the plot is novel, but the film easily maintains a low simmer that picks up in the final act.

The film doesn't turn its issues into a glorified essay, but it does use them to give the audience a vital emotional workout.

Between Gere matching wits with a police detective played by Tim Roth, and Gere having to explain himself to the steely Sarandon, Arbitrage is never dull.