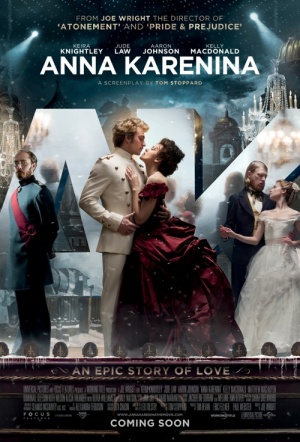 This marks Wright and Knightley's third collaboration, after Atonement and Pride & Prejudice.

Best Costume Design at the Academy Awards and the BAFTA Awards 2013.
2012Rating: M, for some sexuality and violence124 minsUK, France
DramaRomanceHistorical

Rather than involve us in the story Wright's grandiose concept keeps it at arm's length.

It is risky and ambitious enough to count as an act of artistic hubris, and confident enough to triumph on its own slightly - wonderfully - crazy terms.

Not a total success, but it's a bold and creative response to the novel.

A sumptuous film - extravagantly staged and photographed, perhaps too much so for its own good.

All dressed up with no place to go.

Worth it for the glitz and Wright's brave film-within-the-theatre idea.

The weight of its intellectual distancing device presses much of the life and feeling out of it.

If it doesn't ultimately engage your heart as it might, Anna Karenina is period drama at its most exciting, intoxicating and modern. Spellbinding.

There's no deadlier sort of movie than a stodgy literary adaptation. Thankfully, Joe Wright seems incapable of making one.