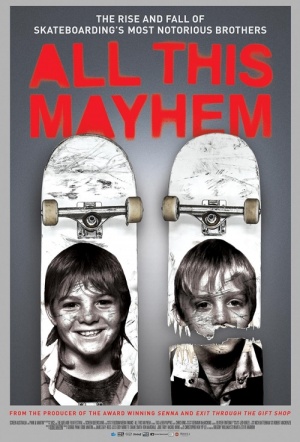 Documentary on Ben and Tas Pappas, the two Australian brothers at the forefront of vertical progression skating in the early 1990s whose addiction to drugs took them from the pinnacle of their sport into a spiraling world of self-destruction. Directed by childhood friend and documentarian Eddie Martin.

In 1990 the young brothers went to the US for the first time to pursue their professional career. The Melburnians peaked at number one and two in the world respectively, but soon injuries, drugs and crime plagued their careers, resulting in eventual incarceration, deportation from the US and worse.

All this Mayhem / Reviews

Martin turns a cautionary tale into rollercoaster material: with extraordinary home-video footage capturing the Pappas' rise and fall with an immediacy that leaves you stirred, shaken and moved.

It is the brace of interviews conducted in the present day that really resonates with the viewer.

Candid and clear-eyed, this doc will wow boarding fans but has something to offer to the unconverted too.