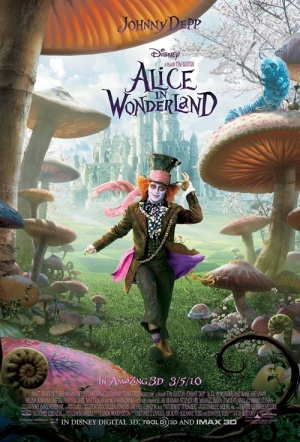 Tim Burton (Edward Scissorhands, Sweeney Todd) seems the perfect director to bring Lewis Carrol's trippy children's fantasy to life. A combination of live-action and computer animation is used to tell the story of a young girl named Alice (Australian newcomer Mia Wasikowska), who falls down a rabbit hole into a strange world full of strange characters.

Those characters include Johnny Depp (in his sixth collaboration with Burton) as the Mad Hatter, Helena Bonham Carter as the Red Queen, Anne Hathaway as the White Queen, Little Britain's Matt Lucas as both Tweedledee and Tweedledum and Crispin Glover as Stayne – Knave of Hearts.

For all its clever design, beguiling creatures and witty actors, the picture feels far more conventional than it should; it's a Disney film illustrated by Burton, rather than a Burton film that happens to be released by Disney.

A fantastical romp that proves every bit as transporting as that movie about the blue people of Pandora, his "Alice" is more than just a gorgeous 3D sight to behold.

It's not just because of fancy 3D computer graphics that Tim Burton's Alice and Wonderland is the closest to what Lewis Carroll saw when he wrote the book. While no children's classic could be better suited to a storm of pop-out imagery - a puff of the Cheshire Cat's smoke in your face, dodge that hedgehog croquet ball - the effects enhance, rather than make, the film.

Sadly Lewis lite and not without flaws but this is as Burtonesque as one could wish for, a real treat for fans of his twisted imagination and great British character actors.