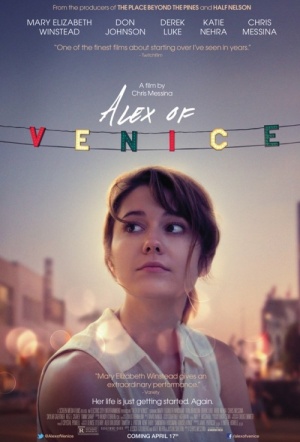 Mary Elizabeth Winstead (Scott Pilgrim vs. the World) is an attorney forced into single life again in this breezy drama, after her husband leaves her without warning. Co-stars Miami Vice legend Don Johnson. The directorial debut from actor Chris Messina.

"Alex is a workaholic attorney trying to juggle a marriage, a young son, and a relationship with her dependent father (Johnson). But as her professional life continues to escalate with stressful cases, her husband (Messina) decides to leave her. Forced to take on the role of both parents, Alex finds her work cut out for her, while reinventing the life she took for granted and slowly solidifying her relationships with her son and aging father... [Messina] has created a character colored by flaws but enriched with empathy, fully brought to life by an impassioned and resonant performance from Winstead." (Seattle International Film Festival)

Stories about average people with average problems tend to make for average movies. This is the unfortunate case with Alex of Venice, a very mild drama that’s passable at best, but doesn’t quite have enough charm or humour to flavour the storytelling tofu.

The pleasures of well-observed characters and small epiphanies are undeniable, and Alex of Venice, actor Chris Messina's directing debut, is amply supplied with both, thanks to Mary Elizabeth Winstead's extraordinary performance.

An appealing portrait miniature of a woman who loses and finds her bearings ...

The whole enterprise is at the mercy of an outline that doesn't entirely suit it.

As much a love letter to the Los Angeles neighborhood as it is a well-observed drama.