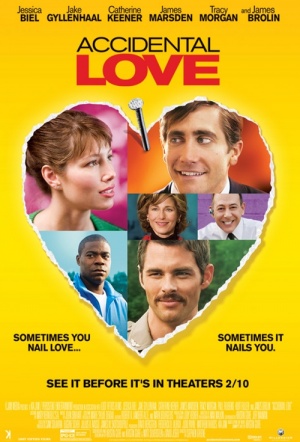 Jessica Biel gets a nail to the head, literally, in this romantic comedy from filmmaker David O. Russell (Silver Linings Playbook, I Heart Huckabees).

Unable to get treatment for her unusual injury, the small-town waitress approaches a good-natured but naïve congressman (Jake Gyllenhaal) to help her out. Co-stars Catherine Keener, Tracy Morgan, and James Marsden as the boyfriend who proposed to her seconds before the accident.

Originally titled Nailed, O. Russell shot the film before his Academy Award-nominated 2010 film The Fighter. The movie was reportedly shut down 14 times during production and post-production.

The movie has an airless, stop-and-go feel, as if a studio-audience laugh track were intended but never inserted.

[Accidental Love] had issues even before the money ran out.

The race for the worst film of 2015 is officially on.