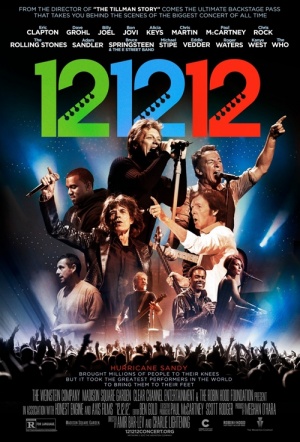 Concert and behind-the-scenes documentary of the benefit gig to raise relief funds for victims of Hurricane Sandy in 2012. The mega line-up includes Eric Clapton, Alicia Keys, Bruce Springsteen, The Rolling Stones, Eddie Vedder, The Who, Kanye West and the surviving members of Nirvana who perform with Paul McCartney.

The concert - MCed by an equally giddy array of stars including Chris Rock and Adam Sandler - took place on December 12, 2012 at Madison Square Garden in New York.

With highlights as good as The Who’s “Baba O’Riley” and the Boss’ “My City of Ruins,” resistance is ultimately futile.

Though the doc plays sincerity by the book, shoehorning in a ton of Jersey Shore cleanup, you get a real feeling for the crazy quilt of tristate community, bonded by crisis and "Baba O'Riley."

Sandler's uproarious off-color parody of Leonard Cohen's Hallelujah injects the film with an inspired note of raucous comedy that undercuts any pretensions to solemnity.

Never goes beyond the level of a really good bonus feature on a special-edition concert CD.

Part concert film, part behind-the-scenes documentary and part a sobering account of the devastating effects on the tri-state area of Hurricane Sandy...