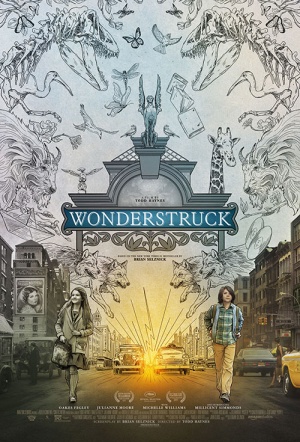 Oscar-nominated director Todd Haynes (Carol) directs this drama based on screenwriter Brian Selznick's novel. Set in two different time periods, 1927 and 1977, and following two children who run away from home - one to find their idol (Julianne Moore), and the other to solve a mystery. Nominated for the Palme d'Or at Cannes.

"Ben and Rose are children from two different eras who secretly wish their lives were different. Ben longs for the father he has never known, while Rose dreams of a mysterious actress whose life she chronicles in a scrapbook. When Ben discovers a puzzling clue in his home and Rose reads an enticing headline in the newspaper, both children set out on quests to find what they are missing that unfold with mesmerising symmetry." (Cannes Film Festival)

For the first time in memory, Haynes is working with a story whose plot outweighs its concept, as lovely as that concept often is.

An ambitious doohickey impersonating a work of art.

Disappointmentstruck and even rather boredomstruck are reasonable descriptions of my emotional state, having sat through this contrived, self-conscious and twee YA fantasy from director Todd Haynes.

While some might question the key role that serendipity plays in this story, more will respond to the immaculate period work, the engaged approach to disability and the gradual swell of emotion which builds to a belter of a tear jerking climax.

Haynes ... puts a kid-friendly spin on his usual themes of isolation and frustrated longing in "Wonderstruck," an ingenious and often captivating adaptation of Brian Selznick's 2011 children's novel.

Alive with the magic of pictures and the mysteries of silence, this is an uncommonly grownup film about children, communication, connection and memory.