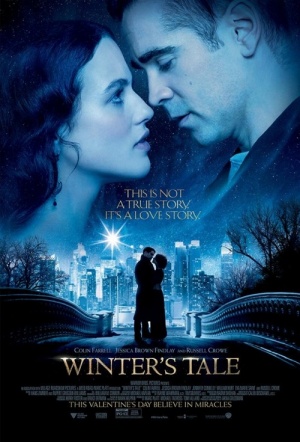 Fantasy-romance spanning centuries, set in both 1916 and modern-day Manhattan. Colin Farrell is a burglar who falls for an heiress (Downton Abbey’s Jessica Brown Findlay), who tragically dies in his arms. When he discovers the ability to reincarnate, he devotes himself to finding a way to reunite with his love.

Peter (Farrell) is a master thief who never expected to have his own heart stolen by the beautiful Beverly (Brown Findlay). But their love is star-crossed: she burns with a deadly form of consumption, and Peter has been marked for a violent death by his one-time mentor, the demonic Pearly Soames (Russell Crowe). Peter desperately tries to save his one true love, across time, against the forces of darkness. What Peter needs is a miracle, but only time will tell if he can find one.

Winter’s Tale is a sweet, grown up fairy tale that begs to inspire wonder, but plummets back to earth just as it begins to grow wings. It stars Colin Farrell as Peter Lake, a petty thief in industrial-era New York who becomes an unwitting pawn in a celestial battle for souls. After robbing, then falling in love with, the doomed Beverly (Downton Abbey’s Jessica Brown-Findlay), his demonic former employer Pearly Soames (a stocky Russell Crowe sporting an Irish brogue that borders on the satirical) tries to dispatch them both. With the help of a mysterious white horse, Peter survives to find that miraculously a hundred years have passed and he has become a bearded drifter with no memory of his past.

Since this marks the directorial debut of Hollywood hack Akiva Goldsman (A Beautiful Mind), there’s a heavy foot applied to the era-skipping leaps made by source novelist Mark Helprin.

Clumsy and inert, a lumbering white elephant rather than the flying white horse that is the novel's magical mascot.

It’s a greeting card of film, full of platitudes and pleasant imagery, and destined to be thrown in a drawer and forgotten in short order.

It's pretty, with wintry white locations and settings, but made with an unrelentingly heightened atmosphere, every scene a climax drizzled with a treacly score.