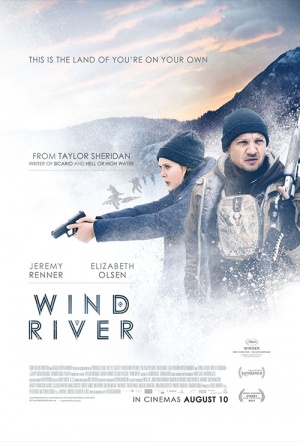 The feature directorial debut from Taylor Sheridan, writer of Hell or High Water and Sicario, is a murder investigation thriller starring Jeremy Renner and Elizabeth Olsen.

An FBI agent teams with the town's veteran game tracker to investigate a murder that occurred on a Native American reservation.

Taylor Sheridan, the screenwriter behind Oscar nominees Sicario and Hell or High Water, sits in the director's chair and shows a concrete command over his third feature script. As an ice-cold western posing as a procedural murder mystery, Wind River is a great sombre thriller that circles you like a pack of wolves before it pounces.

Sheridan wants us to know these people, this terrain, to feel the bite of the cold and the lonely sting of their lives.

You learn to look for tracks and clues; it's a film that makes you a better viewer.

An actor before he was a screenwriter, Mr. Sheridan clearly spent a lot of his time learning about filmmaking on movie sets; his direction is assured throughout.

The set-up in which an outside investigator is sent to an inhospitable location to solve a murder isn't new, but Sheridan brings a welcome freshness to the concept.

At first I thought the resolution to the movie was bereft of logic, but that just may be the point.

While Wind River doesn't reach the high water mark of those two superb tales it's still a terrifically atmospheric drama.

Combustible, masculine and tense, it demonstrates both that Sheridan can direct with ease and that his written work is eminently filmable.

This tense, convincing independent film is the most accomplished violent thriller in quite some time.