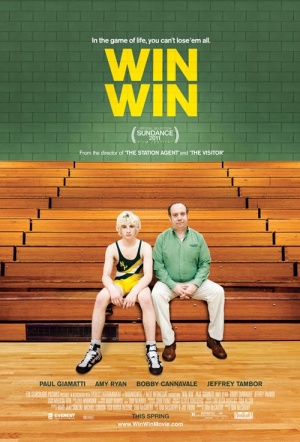 Comedy-drama from the director of The Visitor and The Station Agent, about a dodgy, down on his luck attorney (Paul Giamatti) who moonlights as a high school wrestling coach in order to support his family. Also stars Melanie Lynskey (Heavenly Creatures), Amy Ryan (Gone Baby Gone) and Jeffrey Tambor (Arrested Development).

When the runaway grandson of one of Mike's (Giamatti) elderly clients arrives in town, Flaherty takes him under his wing and discovers the boy has the potential in the wrestling department. Both their lives start to look up, until the boy's mother (Lynskey) shows up, fresh out of rehab, flat broke and threatening to derail everything.

A disappointing domestic comedy in which all but the audience get what they want.

Some accomplished turns, and the mood of downbeat quirkiness has its appeal.

It is in no way challenging or provocative, but it is never dull or obvious.

Win Win has its own unique good-humoured charm.

I'm happy I saw "Win Win." It would have been possible to be happier.

Win Win is hard to pin to the mat but pure pleasure to experience.

This unassuming but quietly winning comedy-drama delivers on the promise of its title.

Funny, agreeable and thoroughly enjoyable, if a little bit too neat and fortuitous in sorting out its entangled strands.