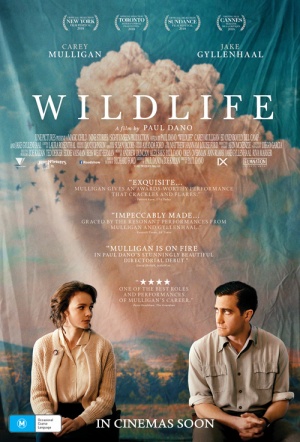 "Fourteen-year-old Joe is the only child of Jeanette and Jerry — a housewife and a golf pro — in a small town in 1960s Montana. Nearby, an uncontrolled forest fire rages close to the Canadian border, and when Jerry loses his job — and his sense of purpose — he decides to join the cause of fighting the fire, leaving his wife and son to fend for themselves. Suddenly forced into the role of an adult, Joe witnesses his mother's struggle as she tries to keep her head above water." (Sundance Film Festival)

This is a superb film.

Dano, it's immediately clear, is a natural-born filmmaker, with an eye for elegant spare compositions that refrain from being too showy; they rarely get in the way of the story he's telling.

A quietly devastating coming of age movie dipped in poison.

Neat and tidy as the film might be - perhaps the "wild" in that title is leading us unhelpfully astray - it gets full marks for sustaining an aura.

Dano has given us a satisfying drama of damaged lives.

There are no shortage of laughs in Wildlife, but this is a fundamentally melancholy picture. It's also an assured first film from an actor who will hopefully continue to direct.

Actor Paul Dano has made a small gem in Wildlife, his first film as a director.