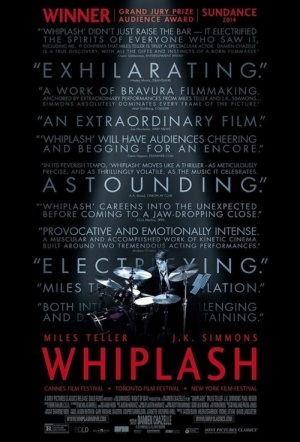 Intense, Academy Award-winning student-teacher music drama starring Miles Teller (The Spectacular Now) as a young jazz drummer aspiring to make it to the top, but having to go through the brutal tutelage of his ruthless instructor (J.K. Simmons in an Oscar-winning performance).

An eager-to-the-point-of-obsessive student at the prestigious (and fictional) Shaffer Conservatory, 19-year-old Andrew Neiman (Teller) pushes himself to become one of the all-time greats behind the drum kit. In the thick of this ultra-competitive environment, he catches the eye of the terrifying Terrence Fletcher (Simmons), who picks Neiman to play in the Conservatory's elite house band. With this opportunity comes a scarcely believable level of abuse, something Fletcher sees as necessary to unlock Neiman's full potential - but will he break him in the process?

As a stress-inducing exercise in cinematic asphyxiation, Whiplash is this year’s Gravity. Where Alfonso Cuarón’s film placed an astronaut into merciless space, writer-director Damien Chazelle chucks 19-year-old jazz drummer Andrew (Miles Teller) into the merciless grasp of a brutal music instructor (JK Simmons). And just like Gravity, Whiplash is bound for Oscars.

Demolishes the cliches of the musical-prodigy genre, investing the traditionally polite stages and rehearsal studios... with all the psychological intensity of a battlefield or sports arena.

Scrapes the far edge of crazy passion. It never apologizes.

It may get a few things wrong, but it aims at, and finally achieves, an authenticity at once more exalted and more primal than mere verisimilitude.

It's rare to see a film about music that professes its love for the music and its characters equally.

The film’s aversion toward clichés and hitting expected beats lends it a rare, welcome edge of danger.

As for the strangely exhilarating ending, it makes clear that what we have been watching is less a statement about art than a love story: a twisted one, but romantic in every sense.

The antithesis of “let’s-put-on-a-show” fluff, Whiplash...is about the wages of all-out sacrifice and commitment.